Black Perle is our milk coffee stout, and a cask of this escaped the brewery earlier this week, so we thought we better introduce it properly.

The idea for this beer came when I was drinking a Perle single hop IPA. My wife hates milk, and upon sampling the beer she starts screaming that it tastes like milk. Now the power of suggestion can be a strangely strong thing, and i could then taste the milk in this beer, but I found it less objectionable. Around this time we were working on our stout, so this all got me thinking about a milky coffee stout. Milk stouts or sweet stout are traditionally made with milk sugar, or lactose. So we combined all these to make a sweet, milk, coffee stout. I don't think this tastes like a milky sweet coffee, but it definitely works as a sweet coffee stout, AKA milk coffee stout. 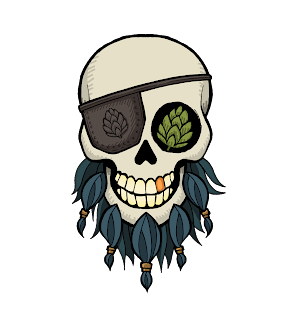 I think this was one of the easiest beers to name so far. It is a stout, so black, and it is single hopped with Perle, although this isn't always pronounces as in pearl, but it is close enough (to not get sued). This is now sounding very much like a ship from a well known film, and I'm sure everyone out there likes the classic pirate, don't they? So Lup'in put on his pirate persona and Black Perle was born. 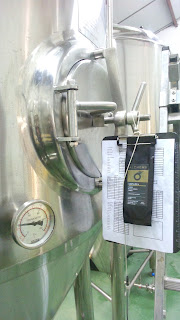 When it came to sourcing coffee for this beer, we wanted to find a supplier local to us. We ended up being put in contact with Alchemy Coffee by a mutual friend. They invited us over one evening, and we arrived armed with a prototype bottle of Black Perle, and another non coffee milk stout as a tester. When we arrived they had thought about our proposal and select 3 different beans to sample. They talked us through and tasted all these with us, and we talked them through our plans for the beer, while sampling that. We then went through each bean, mixing it with the milk stout we had brought and trying to find the best match. We went with a Costa Rican Zamorana bean. This wasn't the most exciting coffee we tried, but the one that suited this beer best. The more exiting one will find it's way into another beer in the future. We really enjoyed our evening with Jamie and Joe, and hope they will visit us at the brewery some time soon.

Now, this was our 3rd brew on the new kit, coming just a week after the brew of Miss The Lights. I am not going to lie to you, we are still learning the kit, and this brew didn't go without it's issues. The main problems came from changing our process from lessons learnt, but going too far in the other direction. We backed off slightly on the grain bill, as we had been getting higher efficiency in the last couple. We are also having some issues with volumes, as sight glasses on some of the vessels had not been installed at this stage. This all resulted in this batch weighing in at 3.7% instead of the planned 4.5%, which also makes it a little thinner than we would like. We think the taste of the beer is pretty much spot on, so decided to release it as Black Perle, but we hope to bring future batches back up to the original 4.5%. 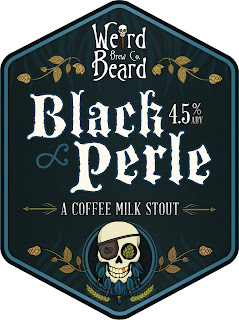 Black Perle will be available in 500ml bottles and on cask. There is a possibility it may appear on key keg some time in the future, but we dont feel that this first batch quite suited it.

I also mentioned that a cask of this escaped the brewery this week. That would make this the first commercially available Weird Beard beer to be in pubs. We did have Shark Biscuit a while ago, but this was a collaboration. Miss the lights was supposed to be the first beer released, but our good friends at The Bull in Highgate where having a stout and oyster festival. These guys offered us our very first collaboration brew a while back, and we owe them a lot for this, so we couldn't say no. So go and try Black Perle along with some other fantastic locally brewed stouts this week end (14 - 17th March 2013).
Posted by Weird Beard Bryan at 06:48